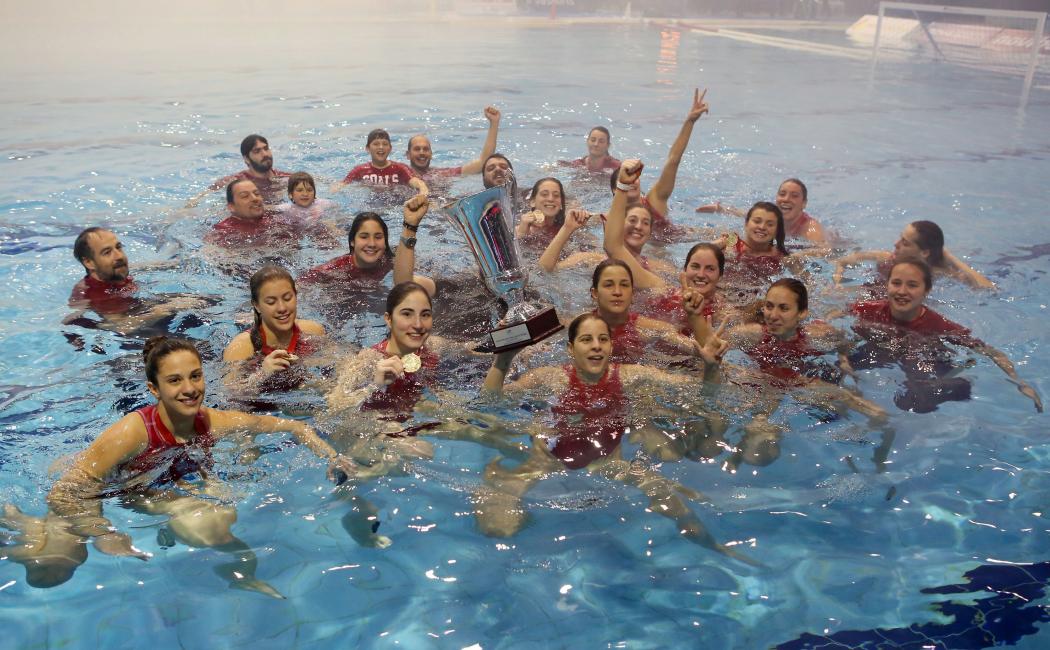 Olympiacos won its second European title in as many years: the Greeks clinched the LEN Trophy in 2014 and now the Euro League. They edged out title-holder Sabadell in a thrilling final, becoming the second team in history whose men’s and women’s teams could win the most prestigious club tournament respectively.

The final was simply fantastic. Sabadell started in a commanding way, they led 4-1 in the second quarter but Olympiacos, backed by 2,000 enthusiastic fans, scored twice in 47 seconds before the middle break. The first turning point came in the third period, when Olympiacos netted three connecting goals after 5-3 and took the lead for the first time at 5-6 and later went to 6-8, thanks to brilliant goals from their Aussie player, Ashley Southern (she hit 4 in the evening).

However, Sabadell wasn’t done, the title-holder showed their strength and with a double from Jennifer Pareja in the fourth they were ahead again at 9-8. Few would have guessed that the Spaniards would not score any more in the remaining 5:14 minutes. But the Greeks’ defence worked well, after Triantafyllia Manolioudaki equalised, Olympiacos denied two 6 on 5s of Sabadell and it was Manolioudaki again who found the back of the net in the last moments of a man-up with 33 seconds to go. It proved to be the game-winner – bringing the Euro League title to Olympiacos after a LEN Trophy win in last year.

The Greek club has also become the second European team in history whose men’s and women’s side has clinched the top honours in continental water polo.

Harris Pavlides (coach): "The biggest success is not the trophy for me but the fact that we won an unbeatable team in Europe. I told my athletes that if they didn’t win today, Sabadell would not lose for at other three years. We expected this game as we had lost 9-8 in the Super Cup Final. At the beginning, Sabadell took advantage of its experience and achieved many goals at the end of the time. I had said two years ago when we lost the championship by Vouliagmeni that this team will win titles inside and outside Greece and that became true! 50% of success belongs to the Administration and the rest to my players."

Filio Manoloudaki (Chief): "Many people ask me how I had this temper at the end and achieved the crucial goal of victory. I have no words to answer. I just stayed calm and I did not think anything. It's a huge success for the club! This moment will be unforgettable and I hope to relive something similar."

An amazing semifinal against Kirishi!

Olympiacos did an important victory and qualified to the final of the Euroleague final-four held in Piraeus. The ‘’Reds’’ won 10-8 with Bianconi having a great performance and scoring 6 goals.

Olympiacos was stressed in the beginning of the game. The first period was balanced ending 3-3. Olympiacos was back with 3-4 but ran a 3-0 streak before the end of the first half. Olympiacos and Kinef entered the final period with 7-7 on the scoreboard but the Greeks managed to stage a fine finish, thanks to their Italian star, Roberta Bianconi who did an outstanding job by scoring 6 goals. The Russians came back to 9-8 with 2:16 to go, but the hosts withstood the pressure and Bianconi secured their win with 10 seconds from time (10-8).

Olympiacos faced the Hungarian Szentes in the quarter final and did two victories. Firstly, it beat 10-6 in Piraeus and secured the qualification in Hungary by winning 15-10.

First in the group stage!

The ‘’Reds’’ finished in the first position of the fourth group held in Papastrateio achieving four victories in an equal number of games.

The results of the 4th Group: