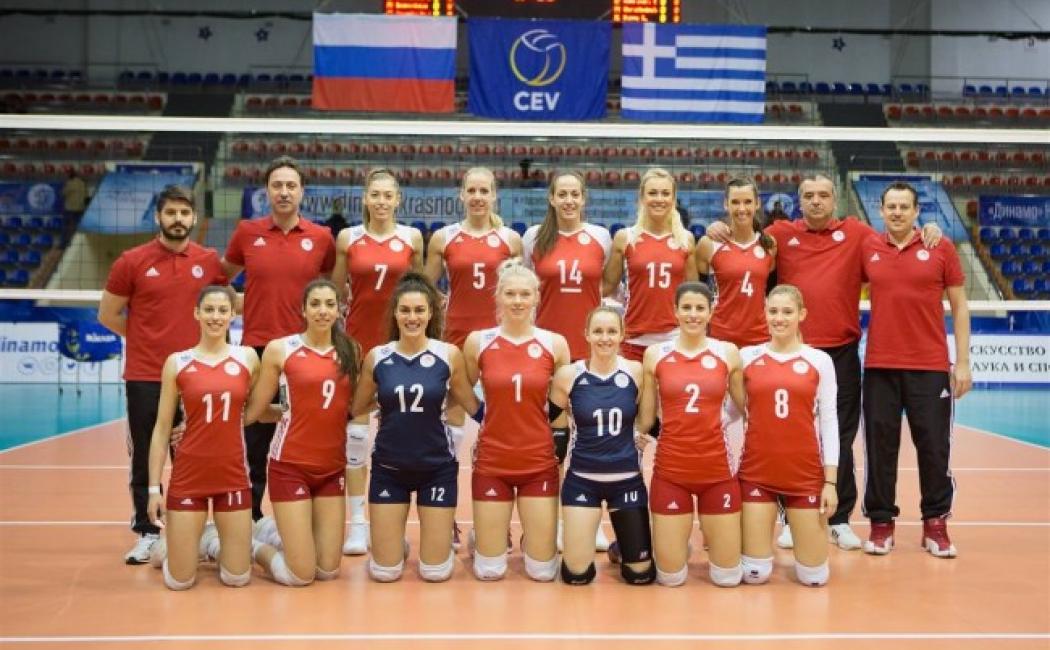 Legendary performance and qualification to the Final!
Wednesday, 21/3/2018

Olympiacos proved they deserve to contest the final stage of the CEV Challenge Cup as they beat Dinamo KRASNODAR in straight sets. After playing a five setter in the first leg of the semi-final phase, the Greek team hit hard from the beginning of the match, proving a contender for the CEV Challenge Cup trophy. The first final against will be held at the sporting hall ‘’M.Merkouri’’ on Wednesday 4 April.

Olympiacos was back with 3 points in the first technical timeout. Then, it ran an impressive 6-0 streak to lead with 11-8. Dinamo reduced to 10-11 but Niemer and Hippe boosted the difference to +3 in the second technical timeout (13-16). The ‘’Reds’’ kept the lead and Stella Christodoulou scored for 18-22. A block by Hippe secured the winning of the first set for the Greek team (20-25).

The ‘’Legend’’ also remained serious and concentrated in the second set. It reached 8-5 in the first technical timeout and widened the margin to +7 in the second one (9-16). Then, the players kept the same rhythm and Christodoulou and Poll scored for 15-24. Hippe did 15-25 making a step to the qualification in the final.

Olympiacos was totally concentrated in the third set and took the lead with 8-5 in the first technical timeout. Then, it increased to margin to +6 (10-16) and continued the run until 10-20. The ‘’Reds’’ reached 13-25 easily and celebrated the qualification in the European Challenge Cup Final for a second consecutive season.

The Head Coach of the team, Kovacevic said: ‘’There are many and very strong our feelings. If we look at the result, it looks like an easy game but the qualification did not come so easily. In the first match, we were under pressure, but today it was probably the first time we did not make any mistake. The whole team played at a very high level and we did not have ups and downs from start to finish. Now we will have time to prepare for the finals. The first impression is that Bursa has changed its team more than we do. Today is a huge day for Olympiacos as a club. Congratulations to the Men's Volleyball Team who also qualified for the Challenge Cup Final ".

Christodoulou stated: ‘’Today, the team had a very good performance and got an easy victory against a very strong team. We are very happy that we are in the Challenge Cup final for a second consecutive year. We are expecting our supporters in the first final at our home to claim the victory over last year's Challenge Cup champion. Congratulations to our men’s team who also qualified to the final.’’

Saskia Hippe said after the historical success at osfp.gr: "I am very happy and proud. We won in the second match easily and we are back in the final. We have the first game in our headquarters and we continue to dream. Everyone has to come to Renti on Wednesday 4 April, to win the first game."