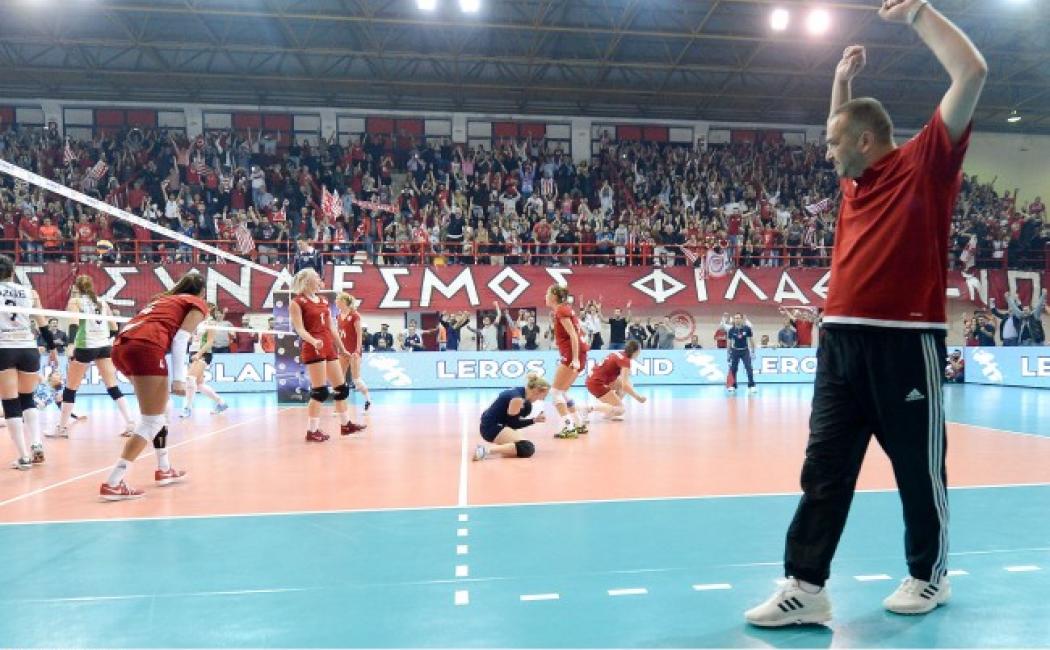 Olympiacos comes from behind to claim first round of Challenge Cup Final!
Wednesday, 12/4/2017

In an amazing display of top-level Volleyball, Olympiacos produced an epic comeback from a 0-2 set deficit to claim a 3-2 victory over Turkey’s Bursa in the first round of the 2017 CEV Volleyball Challenge Cup – Women Finals. Driven by 2,000 fans who kept cheering throughout the entire match, Olympiacos were able to break the resistance shown by 2015 gold medal winners BURSA BBSK. Saskia Hippe top scored with 20 points as Olympiacos produced the club’s best result in any European competition so far. Ana Lazarevic (14 points) and Nadzeya Malasai (15 points) contributed to this historic success as well. As for BURSA BBSK, Joyce Gomes Da Silva stood out with her 19 points, together with Dora Horvath (18 points), Ipek Soroglu and Ivana Prokopic – who chipped in with 15 points apiece.

Bursa were able to rally to a 2-0 lead, as the players of Olympiacos seemed to feel the pressure resulting from a European final. The Greek team’s reception was under huge pressure because of the Turkish serves, which targeted most of all Malasai, who seemed not able to cope with that pressure and offered some easy points to the opponent team. Olympiacos head coach Branko Kovacevic, halfway through the second set, replaced her with Evgenia Tsima. The player born in Bulgaria greatly improved her team’s reception and success rate in attack, thus earning some good points and, most importantly, not giving any away anymore.

In the following three sets, a driving Olympiacos, propelled by their throbbing fans who kept their loud cheering going with almost no interruption, managed to complete a sensational comeback. The third set was a relatively easy win for the Greek side (25-20), whereas in the fourth one, the hosts stormed back from a 17-19 deficit to earn eight straight points and tie the match. The fifth set was a true one-team show. In a blazing atmosphere and under the fans deafening songs, Olympiacos were able to take on the driver’s seat. BURSA BBSK, on the other hand, made many mistakes and Olympiacos rallied to a comfortable 15-10 win to take a first step towards netting what would be a historic European title.

Now, it all comes down to the return match taking place in Bursa on Saturday, April 15, with Olympiacos in hold of a small advantage following their home win on Wednesday night.