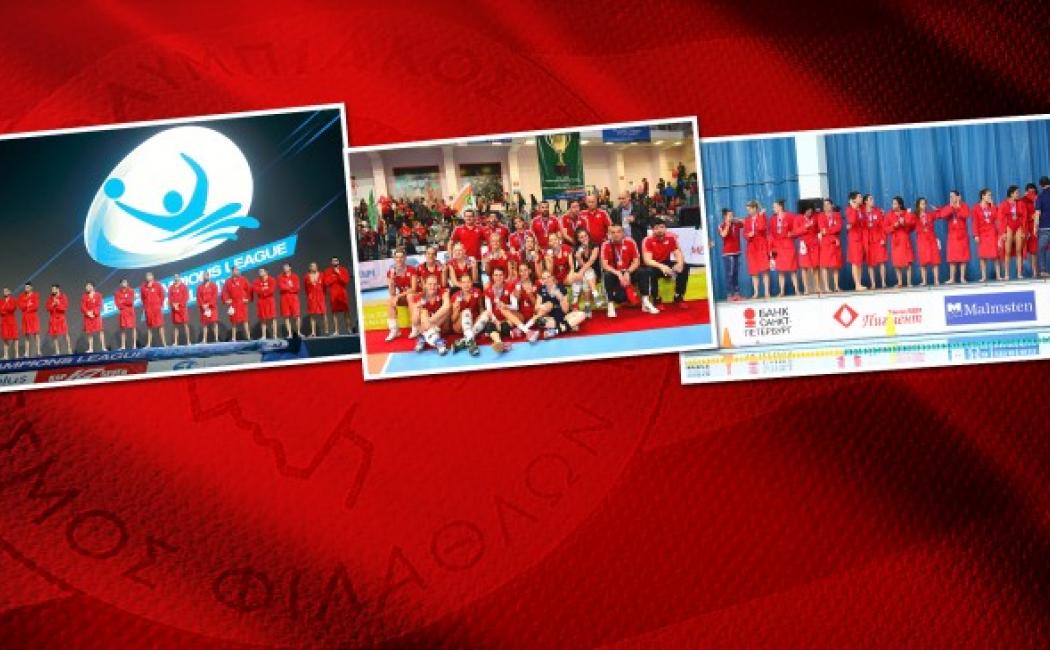 In 2017, Olympiacos achieved historical successes which make it a landmark year for the presence of the club in European competitions.

In the season 2016-2017, three sections represented the club outside Greece offering great distinctions in Greek sports.

During 2017, three departments participated in European competitions, the two of which reached the finals competing for the winning of the trophies at the homes of the opponents.

The great successes of the seven European finals and three European titles in four years prove the magnitude of Olympiacos as a multisport club and locate it in the European elite.

The rematch and the dethronement of C.S.M.!

The European Women's Volleyball participation started on 14 December 2016 and lasted until the last stop and final in Bursa on 15 April.

The double triumph against Canakkale!

The next opponent was the Turkish Canakkale from the strong Turkish championship. Olympiacos won the away game in the tie-break on January 24th. This victory was one of the most important ones outside Greece. The ‘’Reds’’ had an excellent performance and led 2-0 sets. Canakkale reacted and tied to 2-2 but Olympiacos showed its strength wining 15-9 in the tie-break and making the first step to qualify. On 7th February, the rematch was thrilling. Canakkale led 1-0 but Olympiacos overturned the game with 1-2. The ‘’Reds’’ was the leader of the fourth set winning 25-19 and equalizing the game. In the tie-break, the Turkish team went ahead with 9-11 and 12-13 but Gina Lambrousi and Stella Christodoulou scored to give the qualification to the quarter-finals of Challenge Cup!

An away victory with the support of fans in Beveren!

The amazing presence of the ‘’Reds’’ continued with the victory against Asterix in tiebreak on 22 February. In this game, Olympiacos had the support of sixty fans who helped the team to get the fifth win and take an advantage for the qualification to the semi-finals. On 8 March, the ‘’Legend’’ beat the Belgian team 3-1 in Renti and qualified to the semi-finals writing a golden page in the club history.

Olympiacos won Yenisei Krasnoyarsk 3-1 in Renti having the support of 2,000 fans and took an advantage for the qualification to the European Final. In the first game of the semi-finals, the team widened its impressive run doing the seventh victory in seven games and gained a significant lead. The enormous moment of the ‘’legendary’’ triumph was written in Krasnoyarsk on 2 April.

The ‘’Reds’’ were defeated in Russia but the 3-1 win of the first game and the golden set in the rematch were accurate to celebrate the historical triumph. An ace by Gina Lamprousi secured the qualification for Olympiacos.

Olympiacos continued to glorify Greece and Greek sports on 12 April! In the hot atmosphere created by the fans at the Renti’s court, the ‘’Reds’’ dominated against Bursa in the first final of the CEV Challenge Cup. Despite being back with 0-2 sets, Olympiacos reacted, equalized the game and did a tough victory in tie-break possessing mental reserves.

The excellent presence in CEV Challenge Cup completed on 15 April. The ‘’Reds’’ competed for the European title but didn’t achieve to win it. However, this success and the feelings created to the fans are an important legacy for the future glorifying the club and offering happy moments to the Greek sports.

First in the group with three victories

The participation of the women’s water polo team in European competitions started in Papastrateio on 13 January. The first opponent was the French Lille with Olympiacos winning 19-3 easily. In the second day, the ‘’Reds’’ achieved to beat a tough game against Dunaújváros (8-7) taking an advantage for the first position of the third group. The third consecutive victory was against Utrecht (6-5) and Olympiacos celebrated the qualification to the quarter-finals.

Olympiacos played against the Italian team, Padova on 25 February. Although the team had an excellent performance in the first three quarters winning 10-6, the bad referee decisions led the game to 10-10. In the rematch, the ‘’Legend’’ celebrated the qualification to the final-4 of Euroleague for the third consecutive year beating 11-10 on penalties. In this game, Thodoris Vlachos was the head coach as Charis Pavlidis and his assistant Giorgos Katsoulis had been ejected in the first game in Italy.

The triumph against Sabadell!

Olympiacos did another important victory against the European Championship Sabadell with 11-9 on penalties in the semi-final in Kirishi of Russia. After an exciting comeback losing 5-1 in the first half, the ‘’Reds’’ tied to 7-7 with a goal by Bianconi twenty-two seconds before the end leading the game to penalties.

Two saves by Diamantopoulou secured the qualification to the final. The ‘’Reds’’ dethroned the outgoing European Champions as it had done two years ago in Piraeus!

Olympiacos competed for another European title until the last second but was defeated by the host of the final-four, Kinef Kirishi with 7-6. The team completed its impressive European presence playing in another final and winning the silver medal in Russia. The ‘’Legend’’ competed for the second Euroleague title in three years and the fourth European trophy in four ones participating  in a final-four for third consecutive season.

As the finalist of the last year competition, the men’s water polo team started the LEN Champions League. Olympiacos beat Brescia 8-4 in Papastrateio on 30 November 2016.

It was an amazing start for a successful presence as the ‘’Reds’’ secured the qualification to the final-six for a second consecutive year winning Spandau 10-8 in Papastrateio. The team did another win against Nice but was defeated by Szolnok in the match for the first position with the Olympiacos finishing in the second one of the group. The first round ended with a painless loss by Brescia in Italy.

The quarter-finals against the European Champion, Jug

Olympiacos didn’t achieve to overcome the difficult European champion Jug Dubrovnik as it was defeated 8-11 in the quarter-final held in Budapest on 25 May. The bad start cost the defeat with Olympiacos being back with 2-7 in the first half. Although the performance was impressive in three minutes of the third quarter and tied to 7-7 with five consecutive goals, the ‘’Reds’’ didn’t achieve to complete the overturn. The European presence ended with a loss by Brescia with 5-8.