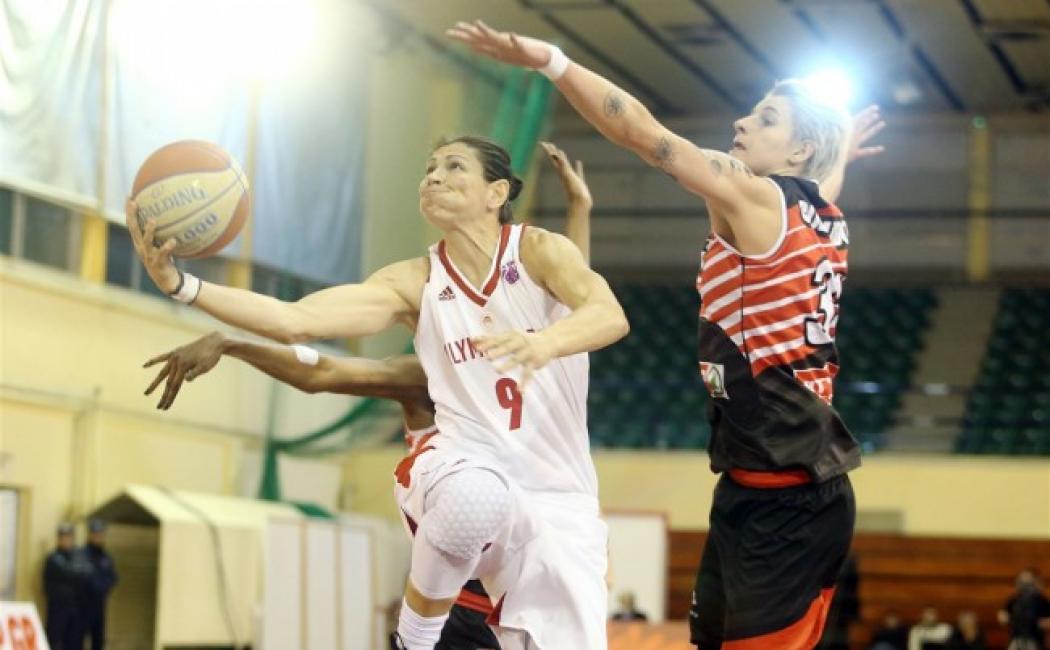 An important victory against Girona!
Thursday, 4/1/2018

Having a great defencive performance, Olympiacos made the first step to qualify to the next Eurocup phase, dominating against Girona 65-60 for the first game of the Eurocup round of 16. The ‘’Reds’’ gained a great victory and now, goes to Spain so as to ensure the qualification to the next round. Macaulay scored 15 points, Kaltsidou added 14 and Maltsi had 13.

The game started with Olympiacos leading 11-5 after the succesful shots of Macaulay and Katsidou. Maltsi was excellent in the first period scoring 11 points and so, assisting the team to precede with 11 points (18-7). Girona reduced to 19-13 at the end of the first quarter.

The ‘’Legend’’ continued in the same rhythm with Macaulay and Maltsi adding two-point shots to boost the difference (23-16). Girona run a 6-0 streak until Nikolopoulou and Macaulay replied with two shots. The American center scored another shot to increase the margin to +7 (31-24) at the end of the first half.

In the third quarter, the Olympiacos players lost their concentration and the Spanish team got the lead six minutes before the end (33-34) running a 10-2 streak. Girona continued to precede increasing the run but Olympiacos reacted with Macaulay and Chatzinicolaou to reduce to 39-40. Romeo, however, did a three-point shot (39-43) and Kaltsidou replied for 41-43. The quarter ended with the ‘’Reds’’ staying back 5 points (41-46).

In the first minutes of the last period, the two teams were concentrated on their defences. Olympiacos reduced with a three-point shot by Maltsi (47-49) and equalized with Kaltsidou 6:30 before the end. The ‘’Reds’’ continued their good defence but two mistakes on the attack gave the lead to Girona (49-53). Olympiacos reacted with two shots by Chatzinikolaou and Kaltsidou and took the lead with a tree-point shot (56-53). Maltsi, Anderson and Macaulay increased the margin for Olympiacos to +5 (63-58) twelve seconds before the end. Romeo did two free throws and Macaualy replied for the final score (65-60).

Missas stated: ‘First of all, we knew that Girona is a very good team. It has 81 points per game average. Our first goal was to play good defence and limited their offense to60 points. Second, we thought that we should control the pace of the game and did it. Third, we were good at the defensive rebound. We did a really good job there. I think we won the game thanks to our defense and our clear mind in the fourth period. In the third one, we weren’t concentrated on the attack and Girona could have preceded with 10 to 12 points. But for a second consecutive game, I have to say we played good defense. Now we have to clear our minds, be better on the attack and work better. These are the keys to the game. We play at their home but we have to do our best. "

Evina Maltsi pointed out at osfp.gr that: "It was a very tough game. Girona is a very good team and it will surely be a different game there. I think we were ready to win and showed that we wanted it. We started well in the first half and gained more confidence. So we got a good lead in the score. Girona reacted and played much better in the third quarter. It is something that we have to work on. There will be a harder game. It is a very good team, as it should be at this stage of the Eurocup, but today we really believed in ourselves and proved we wanted it very much. So we have a week to prepare and be ready to fix our mistakes and see what happens in Girona.’’