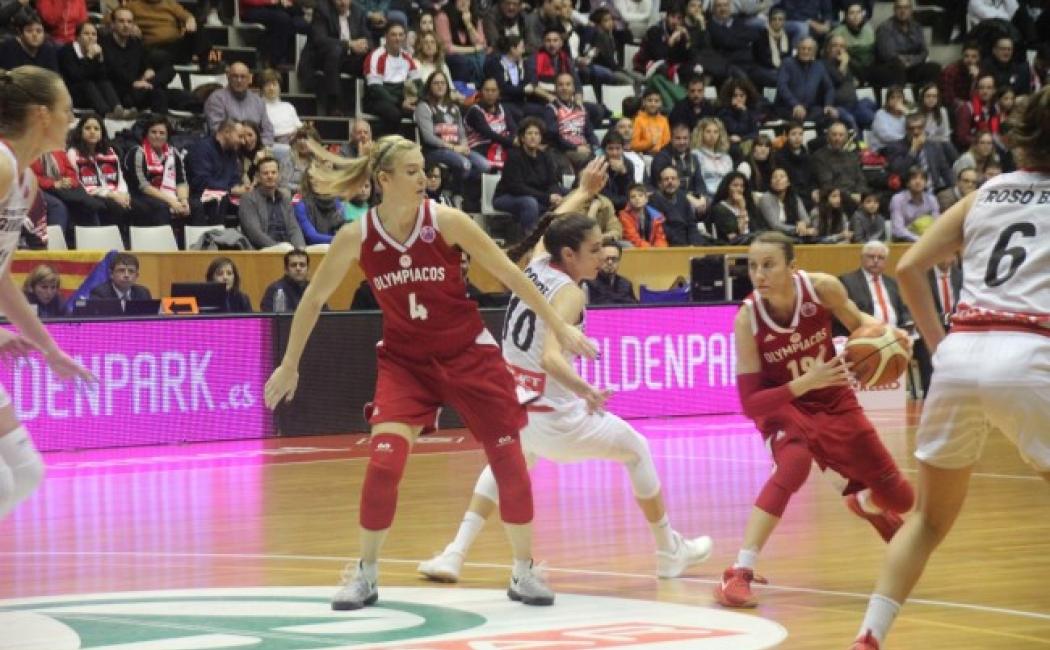 Olympiacos was unable to recover from its bad first half,  lost by Girona with 89-62 at Pavelló Municipal Girona - Fontajau and stayed out the Eurocup. Despite the win (65-60) in the first game in Glyfada, Olympiacos was defeated with more points and now, is focusing on the Greek competitions. Macaulay scored 17 points, Anderson had 14 ones and Chatzinikolaou added 12.

Olympiacos started the game with Anderson, Chatzinikolaou, Katsidou, Macaulay and Mazic. Kaltsidou and Macaulay scored for 0-4. Girona reacted and ran a 12-0 lead with Colhado, Mendy and Evans scoring four points. Macaulay reduced to 16-6 and Mazic at 18-8, but Evans hit a three to boost the difference to 21-8. The ‘’Reds’’ replied with two three-point shots but Romeo closed the first quarter with a triple (29-16).

The ‘’Legend’’ reduced to 30-18 with a two-point shot by Maltsi, but the defensive mistakes allowed the home team to increase the margin to +18 (36-18). Olympiacos tried to reduce with Anderson and Chatzinikolaou scoring for 36-23. In the last minutes of the first half, Girona raised the difference to +20 with Olympiacos having a problem both on defence and attack.

Olympiacos tried to react but wasn’t enough. Chatzinikolaou and Macaulay fell the margin to -15 but Girona replied with a 7-0 run (56-34). Maltsi hit a triple and Mendy scored in the same way (59-37). Chatzinikolaou scored another shot of 6.75m for 61-40 and Macaulay did 64-42. The Greek guard reduced the difference again to the 20 points with a drive and Macaulay added two points. The third quarter ended with a three-point shot by Alconado (69-46).

Olympiacos didn’t do good offensive choices apart from Macaulay attempts and the difference went up 26 points with a three point shot by Evans (74-48). Anderson and Chatzinikolaou reduced the margin but the Spanish team replied with a 11-4 run. The game didn’t change until the end and Olympiacos disqualified in the Eurocup. In the next season, it will come back sharper, more experienced and even stronger in its European obligations.

Missas said: ‘’Congratulations to Girona. They played very well and qualified for the next round. We played better in the defense in the first game, we were more focused, we knew that Girona is a team that scores 81 points on average in Eurocup. So we had to limit its offense, but today we were not so focused on our defense and Girona was very good on its part. We lost our minds on the attack and we did not control the rhythm. So the game went on, Girona got the game and I wish to continue well in the competition. "

Andrew Anderson stated: "We were defeated by a very good team today. They looked like they could not miss any shot especially in the first half. Their pace could not have fallen, and we knew that the game would be totally different in Girona. We were bad on the periphery as opposed to those and we were not defensive to the levels we should be. Because of our defense we could not run into the attack. It was a level above us today and they got the qualification. "